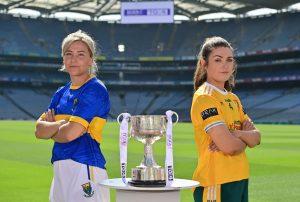 Saffrons set for All Ireland Glory in Headquarters

Antrim Senior Ladies footballers have qualified for the TG4 All Ireland Junior Final on Sunday 5th September at 11.45am in Croke Park. Antrim will face Wicklow in the first game of a triple header to be broadcast Live on TG4 as part of their commitment to increase promotion of our female games.

There's plenty of excitement in the Antrim camp this week, but like many other teams, the current Ulster Champions have faced their fair share of adversity over the last eighteen months. In what is commonly known as a “transition period”, the Saffron Manager, Emma Kelly, had her work cut out for her trying to balance the fresh faces on the squad with experience.

After a solid league campaign, Emma felt Antrim were finally in a position to be dominant again in the Junior All Ireland Championship and last week’s thriller has left her excited for what’s to come;

“We're delighted to be in Another All Ireland Final, it’s where everyone wants to be in September and we are very grateful to have the chance to go out and prove ourselves.

The game against Carlow was ‘edge of your seat’ stuff and I’m very proud that our preparation stood to us and the girls dug deep with a relentlessness that helped us grind out the win.

2009 was the first time Antrim featured in an All Ireland final and  after a tight game with Limerick, they secured a five point victory.

It took another three years before the Saffrons made another successful appearance in Croke Park, this time with a win over Louth.

Hoping to make it three All Ireland wins out of three, 2016 was the last time  Antrim Ladies graced the hallowed turf of Croke Park, but unfortunately fell short.

Cathy Carey of St Ergnat's, Moneyglass, will be the only player to feature in all four finals. After making her senior county debut at the very young age of 13, she is now nineteen years deep in her county career and there are no signs of her slowing down;

“I think 2010 was the only year since 2002 or 2003 that I didn’t line out for Antrim as I went to America that year to play football. It's hard to believe that I’ve been playing for this long! Trust me,  it hasn't all been glamourous but an opportunity to compete for an All Ireland in Croke Park makes the years and years of sacrifice worth it!”

The captain of the current squad, Aislinn McFarland, along with Carey, Aine Tubridy, Anna McCann, Niamh Enright, Caoimhe Stewart, Saoirse Tennyson and Rebekah Hemsworth are the only players to stick around since the 2016 final. A day that did not go in Antrim’s favour, however, there was a lot to learn from it according to McFarland,

“We had got ourselves off to a very promising start, but after half time we fell to pieces and nothing went right at all. We didn’t do ourselves justice on the big stage and whilst it was embarrassing at the time, a lot of us used it as a very harsh learning experience. We're in a better place now  with lots of new faces and upcoming talent from the U16 and Minor squads, who are pushing us all on. It's been a breath of fresh air.  And after our semi final performance last week, we definitely feel we have the capability and drive to redeem ourselves on All Ireland Sunday.”

Next Sunday, Antrim will go head to head with Wicklow. A force to be reckoned with, but nothing is beyond Emma Kelly and her refreshed Saffrons who will be gunning for their second piece of silverware in 2021.