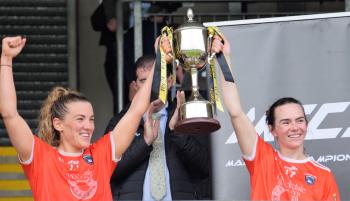 A 54th minute point from substitute Fionnuala Mc Kenna proved to be the winning score in this enthralling Ulster final. Played at a very wet Healy Park both teams gave their all and it was no surprise that it went down to the wire.
The first half seen five goal scored and the Orchard girls went in at the break 5 points to the good (3-7 to 2-5). In the second half Donegal threw everything at Armagh. Gealdine Mc laughlin was superb contributing 1-10 of her sides tally including the equalizing score in the 52nd minute. However it was to be Armagh's day as Mc Kenna who was benched for the first time this season hit the winner with 6 minutes left.
This site uses cookies: Find out more.
Scroll to top