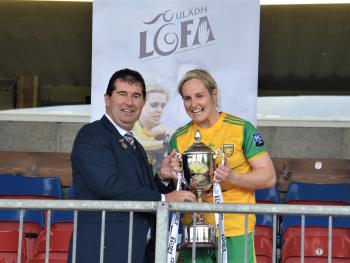 This weekend Michael Naughton will become the 14th President of the LGFA when he succeeds Marie Hickey. Although a native of Sligo Michael has spent most of his adult life in his adopted county of Donegal where he has become a very successful businessman and local representative. Michael has been active in ladies football for a number of years and has led Donegal to an All-Ireland Intermediate title and served as President of ULGFA. He will bring a wealth of experience to the role which he will hold for the next three years.

ULGFA President Eileen Jones has worked with Michael for many years and speaking to our page said, “I am delighted that Michael will take up his new role this weekend and I look forward to working with him in the future. Tom Dowd (Cavan) was the only previous President from Ulster and that was back in 1979-82. Michael has been involved in LGFA administration for many years and is also a county councillor in Donegal so he will have a lot of experience to bring to the role. On behalf of myself, the Ulster Executive and all involved in ladies football in the province I would wish Michael all the very best as he leads us in these unprecedented time”.