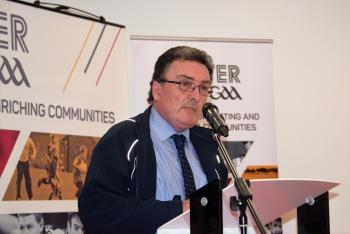 A year like no other was how Outgoing Secretary Gerry Doherty summed up 2020 – eluding to the difficulties that the Covid-19 pandemic had brought to our sport last season. One of things that the pandemic forced upon us was the use of technology and history was made on Friday night when for the first time the AGM was held on ‘TEAMS’.

President Eileen Jones was unavailable for personal reason and Vice President Michael Naughton chaired the meeting which was done and dusted in record time. Michael acknowledged the strange times that were upon us and suggested that only for our use of technology the meeting might not have taken place tonight given the terrible weather that we are currently experiencing.

The first item on the agenda was the adoption of the 2019 minutes. After that Gerry Doherty delivered a comprehensive secretaries report and while he titled his report ‘A Year Like No Other’ he remained an optimist and hoped for a better 21 and 20.

The highlight of Paul Swift’s PRO report was the mention of our Ulster Final being streamed live by the BBC and the hope that we would have a long bright future with the broadcaster. The CODA report was short and sweet as only three matters were dealt with. Culture and Language Officer Caroline Brady was disappointed that we were unable to give any Gaeltacht scholarships due to the pandemic but had some positives in her report especially the continued support we receive from Irish language station TG4.

Ciaran Murtagh took us through a very detailed Development report. While there may not have been much happening on the pitch himself and Aidan Mc Laughlin certainly had a busy year and managed to achieve plenty. The lads embraced technology and made the most of social media to help them in their work delivery.

Registration figures were excellent despite the pandemic. Registrar Paddy Donnelly reported a very slight decrease in membership which still stood at over 23, 000. Credit is due to Derry, Down and Cavan who actually increased their membership.

Once again John Joe Brady with the help of Annette Boyle did  an excellent job taking care of our finances. Naturally enough our gates receipts were down owing to the lack of games but so to was our expenditure. The bank balance is healthy going into 2021.

Paddy Donnelly would normally deliver a very detailed and comprehensive fixtures report but with only a handful of games taking place Paddy had very little to report on.

In the absence of our president Michael Naughton took the opportunity to say a few words. “Its been a difficult year for everyone but I want to thank all our membership for abiding by the rules and doing their bit in a time never seen before and never likely to see again”, said Michael. He went on to congratulate Fermanagh on winning the All Ireland junior title, Armagh on winning the Ulster senior title and Siobhan Coyle on refereeing the All Ireland Junior final. He thanked the 3 lads in the office (Ronan, Ciaran and Aidan) and the Ulster Executive for all their work behind the scenes. he finished by saying he hoped we all see a lot more football in 2021.

The only motion for discussion was from Monaghan and related to the taking of all kick outs from the 20m line. As this would require an change in the official guide Monaghan are to send it on to Croke Park for Congress.

The election of Officers then took place and the following executive was elected.

The various Ulster sub committees and Ulster delegates to National committees were ratified.

Under any other business Seamus O Hanlon took the opportunity to wish Michael Naughton all the best as he took over the National Presidency in March. Michael responded as only he would by thanking Seamus and by telling us all, “I will drive the bus but you all will decide the destination”.