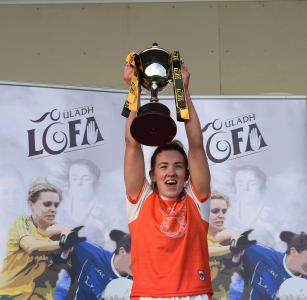 Armagh captain Kelly Mallon contributed five points from free’s as her side captured the Ulster Senior title against a gritty Monaghan side in Clones this afternoon. Despite playing in an empty stadium these two sides served up an entertaining game that went down to the wire.

Monaghan scored with their first attack, a sweet point from player of the match Cora Courtney. For the remainder of the half it was a very tight affair with the score level five times and the lead see sawing between them. At the interval it was advantage Armagh 0-7 to 0-6.

Armagh then raced into a five point lead thanks to four quick scores in the first four minutes of the second half. With ten minutes gone their corner back Shauna Grey was sin binned. With the Dromintee player of the field Monaghan failed to capitalise as they just outscored Armagh by a single point. There was also a major let off for the Farney side as substitute Alex Clarke hit the crossbar with her first effort. Monaghan to their credit didn’t let heads drop and managed to get to within a point with eight minutes left.

Goal chances were in short supply however with just six left on the clock Armagh managed to create one however a top drawer save from Edel Corrigan denied Aimee Mackin the chance. Further points were exchanged in the dying minutes and then as the hooter went Monaghan were awarded a close in free with three points  between the sides. The Farney needed a goal to salvage a draw however Cora Courtney’s rasper went over the bar and Armagh were crowned champions with two points to spare.