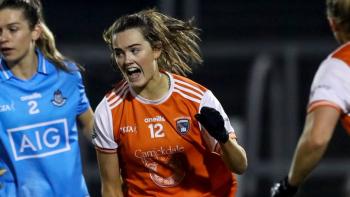 A historic day awaits on Saturday 12 December at 1.30pm when the Ulster Ladies Senior Football Final between Armagh and Monaghan will be live streamed on the BBC Sport NI website, BBC I player and the BBC Sport App to a worldwide audience.

Thomas Niblock will be on commentary with Tyrone star Neamh Woods on co-commentary at Clones.

Armagh will go in as favourites after giving Dublin a fright in the All-Ireland semi-final two weeks ago.

Given the attacking talent that will line out at St Tiernach's Park, a high scoring contest looks on the cards.

Aimee Mackin has hit a remarkable 6-22 in this year's championship to date but Monaghan's sharpshooter Ellie Mc Carron has notched 6-21 of her own.

And Mackin and McCarron are far from being the sole prolific scorers in their teams.

Orchard captain Kelly Mallon has scored 4-28 in the campaign while Caroline O Hanlon, who look BBC Sport NI co-commentator Woods is a Northern Ireland netball star, has contributed 4-20 to date.

Blaithin Mackin has also hit 5-12 for Armagh women - incredible stats for a centre back.

Cora Courtney has been is high-scoring form for the Farney women with 2-22 to her name to date.

Armagh will be aiming to go one better than in last year's provincial decider where they suffered a 5-12 to 1-9 defeat by Donegal.

The last championship meeting between Sunday's opponents was the semi-final clash 18 months ago when Armagh triumphed 5-14 to 1-12.