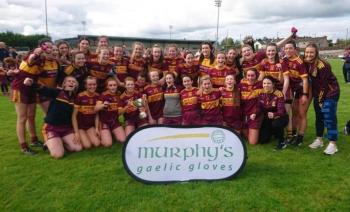 St Macartan’s were crowned Tyrone Champions for a remarkable fifth time in a row at Galbally on Sunday as they eased to a big win over neighbours Errigal Ciaran. The Macartan’s bossed the contest despite conceding an early goal, Captain Niamh Mc Girr, Maura Mc Menamin and Cathy Maguire pulled the strings with Chloe Mc Caffrey among the scorers.

Errigal tried hard, veteran Shannon Cunningham , Claire Canavan and Maria Canavan worked the ball into several good positions but on a day when Macartan’s had more in the tank, Errigal’s challenge petered out.

St Macartans led by six points at the break, goals from Cathy Maguire and Paula Donnelly in the closing stages of the half guiding them back after the shakiest of starts against a well organised Errigal with  Cunningham and Meabh Corrigan working tirelessly at the back.

The sides had been level on two occasions, Errigal failed to score in almost twenty five minutes of football as Macartan’s,  guilty of several wides themselves created several chances.

Maria Canavan had found the St Macartan’s net within twenty seconds, the ball won at midfield sent through by Shannon Cunningham who teed Canavan up for the perfect start. Claire Canavan added a point as St Macartan’s struggled to get into the game, the Errigal rear-guard assured early on.

Tara Meabh Mc Carroll, Michaela Woods and Cathy Maguire tagged on a quick succession of points to settle the nerves, as the five in a row chasing Macrtans came back into the tie although  they did enjoy plenty of ball ahead of the first water-break, that said they had a s struggle to get on the scoreboard.

Niamh Mc Girr scored a captains point from the left for Macartan’s after the break, Chloe Mc Caffrey and Tara O’Hagan added points to pull Ryan Mc Menamin’s charges ahead by two. The Canavan’s Maria and Clare levelled things on the stroke of thirty minutes , again though both teams had plenty of ball without much return.

Colleen Mc Quaid had nudged Macartan’s ahead into injury time before Maguire stole in from the right, held off the defence and beat  Grainne Mc Anenly from close range before Paula Donnelly’s looping effort from thirty metres out found the net to leave it a six point game.

An Early Tara O’Hagan point after the break set the scene for the second half despite an Eimear Corrigan point for Errigal. In reality Macartan’s dominated the third quarter they hit several wides and carved out a series of openings with Mc Caffrey dogged at the back as well as in attack with Shannon Mc Quaid and full back Maria Donnelly in top form at the back as the midfield took charge.

Cathy Maguire pulled the strings as Mc Girr and three on the bounce from a relatively quiet Chloe Mc Caffrey stretched their lead to ten points ahead of the second water break.

Mc Caffrey added only one further score for the champions in the final quarter as Canavan tagged on a brace herself but there was no doubting the quality of Macartan’s as the Jarleth Kerr cup made yet another return trip to the Clogher Valley.

Emer Currie top scored in the Tyrone junior final at Stewartstown with a handsome 1-9 but what turned into a thrilling contest was decided by a goal deep in injury time when Currie and midfielder Caiomhe Magee combined to turn the ball past Laura Kelly for single point one.

In the closing stages Coalisland had nudged themselves two ahead ahead, Caomhe Coyle turning in a goal, but inspired by the ageless Nina Murphy Moy rallied and Magee was on hand to turn the ball to Laura Kellys net.

Kelly will be disappointed, she looked to have got something to the ball but under pressure from Currie the ball spilled to Magee who appeared to get the final touch, heartbreak for Coalisland who had started favourites and led by six points at one stage.

Milena Mihadjuka’s goal ten minutes in, when she was on the end of some great work by Coyle and Mc Sherry was a massive Fianna score as Eadaoin Early had tagged on early points to cancel out a run of three points from the accurate Emer Currie for the Moy.

Moy responded, Currie collected from Mc Alary and fired over while Donnelly steered her speculative shot to Kelly’s net to leave it a three point game at the break.

Moy were quick out off the blocks after the break, Currie scored 1-3 in the third quarter, Jill Sheridan snapping up a bad clearance to set up the goal, they were also wasteful, allowing Coalisland to respond and come back.

Early pointed, O’Donnell sent Murphy in for the goal, she added a point to put her team ahead by one after Commiskey pointed for Moy. The tie swung again, Currie and Magee snatched the lead back in Moy’s favour with five minutes to go as player of the match Murphy steadied things at the back in a frantic climax.

Heading into injury time 1-1 from Coyle looked to have won it for the Fianna and despite a ninth point from Currie they had the two point lead, they squandered a late chance and it proved critical as Magee topped a memorable performance poking the ball to Kelly’s net for a memorable win.