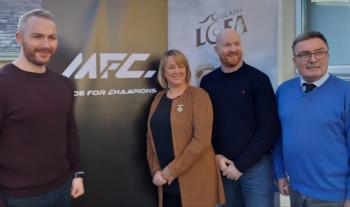 ULGFA President Eileen Jones delivered her first address as President. She pointed out several highlights including the U14 Festival of Football, Fermanagh reaching the All Ireland final and the brilliance of the Club Championship.
Eileen also praised the excellent work of our Development team of Ciaran and Aidan.
She thanked all the county secretaries and had special praise for Maggie Skelton and Jock Grogan who have taken a back seat with their respective counties.
Going forward Eileen announced that ULGFA would be running a pilot programme in relation to mental health within 1 club in each county.
She welcomed our new sponsor/ partnership with MFC
Eileen's main hope is to see Ulster teams in Croke Park and Parnell Park in 2020.
The Executive and various committees were thanked. Paddy Donnelly and Ronan Mc Carthy were praised for their work. Delegates got a special mention when she finished by saying "a wiseman participates and others observe".

Other items of note from the Convention include